Citrulline is an α-amino acid (alpha-amino acid), that is, a non-protein amino acid that is present in watermelon, from which it takes its name from the Latin term for watermelon (Citrullus vulgaris). 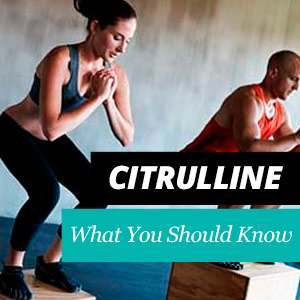 Citrulline improves the physical performance, while increasing the blood flow and the HGH levels.

Actually, citrulline tends to be available in citrulline malate supplements.

This compound consists of combining an esterified citrulline amino acid with malic acid (an apple derivative).

The latest clinical research has discovered the enormous potential of citrulline (citrulline malate) dietary supplements, which is perfect for those who practice bodybuilding or endurance sports. Why? What benefits can be expected of citrulline? We will explain it to you, so keep reading.

One of the most important studies on the effects of citrulline in bodybuilders was published in 2010 by Perez-Guisado and Jakeman in the "Journal for Strength and Conditioning". This study measured the different levels of physical endurance of 41 men in bench press, comparing the results between those who had been given citrulline malate and those who took a placebo.

The men being studied executed performed the execrise, an 80% of their one-repetition maximum followed by a pause of 60 seconds.

It was also found that those who had taken citrulline malate experienced a reduction of 40 percent in muscle aches during 24-48 hours after the training session, compared to the placebo group. Those participating in this study had taken 8 grams of citrulline malate, 1 hour before training.

Citrulline also has positive effects on the physical recovery, increasing the elimination of ammonia (NH3). Ammonia is very dangerous, it can kill cells and increase infections caused by viruses and stimulate the growth of cancer cells. Bodybuilders need more protein than the rest. However, they run the risk of accumulating ammonia, so we suggest paying more attention to the elimination of this toxic substance.

Among the properties of Citrulline, it should also be included that it is a precursor for the endogenous synthesis of creatine.

Athletes who do intense workouts can achieve a better performance by taking citrulline, specially those who predominantly do anaerobic activities like bodybuilding, weightlifting and endurance sports.

This is probably due to the fact that both the muscle detoxification and elimination of ammonia plays an important role in enhancing the physical performance. In a 2010 clinical study, the researchers assessed that 6 grams of citrulline malate increased the growth hormone levels in cyclists considerably, from 24% to 66% when compared to those who took a placebo.

They also detected an increase of around 28% in growh hormones after three days of intense training.

The growth hormone (GH) acts on anabolic amino acids and lipolytic fat cells (fat breakdown). Due to these unique effects, the GH is also used to increase the endurance in different sports, such as bodybuilding.

If you reach these levels of growth hormone by taking citrulline malate, it can give you a clear advantage. The effects of citrulline malate are enhanced when we take it on an empty stomach.

This study also revealed that after taking citrulline malate a more effective result of the amino acids is produced, especially of the branched chain amino acids (BCAA's). Consequently, this increases the energy when we train.

Differences between citrulline and arginine

The scientific studies are focusing on studying citrulline, since the conditionally essential amino acid, arginine, is metabolized relatively quickly in the ornithine cycle (urea).

Arginine is an amino acid that becomes nitric oxide in the blood. Arginine helps to stimulate the production of growth hormones, natural sterols that help to rebuild the muscles after an intense training.

Citrulline also produces a vasodilating effect, opening and expanding the blood vessels. Citrulline, also helps to get rid of nitric and lactic acid, which are produced during intense workouts like bodybuilding exercises and other endurance sports.

Moreover, citrulline produces a higher increase of NO (nitric oxide) than arginine. If we take arginine directly, the amino acid is processed and broken down in the liver by the enzyme arginase. Arginine is oxidized before citrulline with the release of nitric oxide. Citrulline improves the production of arginine.

Citrulline also stimulates the vasodilation (widening of the blood vessels), increasing the blood flow. The vasodilation will increase the amount of oxygen and nutrients that are distributed to the muscles, enhancing the physical performance and our ability to perform intense workouts, resulting in better results in muscle growth and endurance sports.

It is believed that citrulline produces the same effects as arginine, but that it also has other benefits that arginine lacks.

The role of nitric oxide (NO) in the human body

Nitric oxide is involved in several physiological processes. For instance, it regulates the blood flow, vasodilation, platelet function and cell breathing. As a result, nitric oxide can make the blood go faster so that it can reach all the parts of the body, which will increase the blood flow and oxygen to the cells. This increase contributes to a better physical performance and post-workout recovery.

To sum up, we can say that citrulline is an amino acid with a great potential in the future, since many of its benefits may still be waiting to be discovered by science. Although its effects on strength have been proven in clinical studies, we have pointed out that they do not occur in everyone to the same extent. Citrulline malate has other less obvious effects, such as increasing the GH levels, which can provide clear advantages to athletes, specially when it comes to reducing the lactic acid and ammonia, which is particularly great for bodybuilders.

The recommended intake of citrulline malate is between 5 and 8 grams.

The only side effect that has been reported consists of mild abdominal pain, though it only happened in 10 to 15 per cent of the tested subjects, who had taken 8 grams of citrulline malate.

However, people suffering from cardiovascular diseases or who are taking blood thinners should be careful and consult a specialist before taking citrulline malate. Although science currently considers citrulline as a potential "medicine", we need more tests to assess its effects.

To put it briefly: citrulline, like any other dietary supplement, is not a panacea, but for those who are looking for a supplement that improves the heart function, increases blood flow and the GH levels, citrulline malate is the best choice.