The thistle is the medicinal plant that is a popular remedy to treat hepatobiliary disorders.

Scientists have found Silybin in its composition, which is the active ingredient of milk thistle, which reduces liver damage caused by alcohol and other drugs, as well as the damage caused by environmental toxins, heavy metals and bacterial toxins.

Milk thistle seeds have great regenerating and antioxidant properties that stimulate the proper functioning of the liver. Therefore, it helps those that suffer this disease.

Among other things, milk thistle also relieves the inflammation, which is why it has been traditionally used as a natural remedy.

You can purchase Silybum marianum or milk thistle in herbalist's shops and parapharmacies. But HSN is the online store where you will find it at the best price, ready for immediate dispatch.

Its main formats are extracts or capsules, which you can easily transport and take them whenever and wherever you need to. You can also take it in infusions, even though many studies have shown that their positive effects are less effective, since silybin is not easy to dissolve in water. 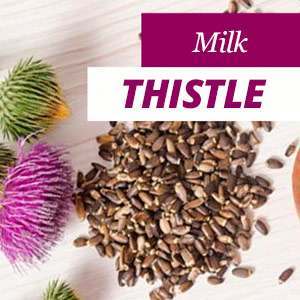 Milk thistle is a vegetable supplement that performs a detox function on the organism. Moreover, it protects the vital functioning of the liver among other properties.